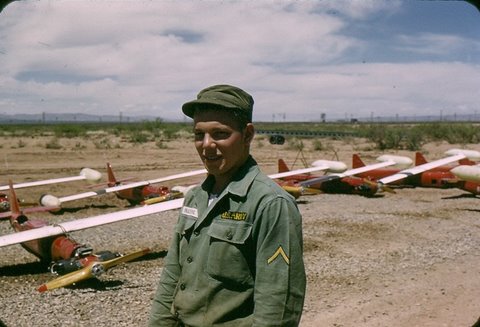 With its beautiful sandy beaches and windswept dunes it was a spot where people would love to build summer homes, but these beaches were far from tranquil. Atop these dunes were mounted some of the most dangerous weapons of their times. Massive 90 MM guns and 75 MM Sky Sweepers faced east overlooking the Ocean and almost daily their fury erupted upon the enemy in the sky. These dunes were the home of the Camp Wellfleet 41st RCAT unit. RCAT units were small units that provided anti aircraft training, they flew small radio controlled airplanes and anti aircraft people shot them down. The RCAT unit at Camp Wellfleet was very informal, being made up of 9 enlisted men and 1 officer.

RCAT stands for (Remote Controlled Aerial Target).  Some would call them toy airplanes but, indeed they were quite sophisticated. The McCullough Corporation (chain saws, trimmers, etc) got its start building the engines for these airplanes. They were a spectacular engine, built like a watch, 4 cylinders, air cooled, 72 horsepower. The bearings in these engines were all roller and ball bearings. Indeed these engines were built better than any automobile engine. The airplanes were all metal, with a 10 foot wing span, and a skid along the bottom for emergency landings, when the parachute wouldn’t work. The speed of the airplane was 225 miles per hour.

They cost about $2,500 dollars apiece, and some would make as many as twenty flights, while others would fly only once. If they took a direct hit in the gas tank, this would cause the plane to explode, and the gallons of fuel would cause quite a spectacular yet expensive explosion. These airplanes were launched, in the early days, by catapult. The catapult was powered by two JATO bottles. A JATO bottle was an Air force item. JATO meant Jet Assisted Take Off; the bottle in the name was misnomer. It was a rocket plain and simple. They were mounted on full sized airplanes in the Air force to boost an oversized airplane on takeoff. They were powerful.  They would take the RCAT airplane from zero to 60 miles an hour in about thirty feet, with another ten feet for the carriage that held the airplane to stop.  The stopping of the carriage disengaged the airplane which was then controlled by radio signals from the control box.  What stopped the carriage was a ten foot long four inch in diameter tube filled with water, capped with a piece of heavy celluloid. This tube of water matched up with a nine foot long pointed rod that was three and seven eights of an inch in diameter on the carriage. When the rod punctured the celluloid cap the water was forced out of the tube in a very limited manner which slowed the carriage. The carriage was actually stopped by a group of thick rubber bumpers. It was actually quite spectacular, and quite a bit of skill had to be exercised in order to prevent accidents and get good launches.

Later a concrete circular track, with a three wheel carriage and a bomb release was used. There was a ring added to the side of the airplane that hooked into a bomb release. When the airplane got up to flying speed the “pilot” pushed a button, and the airplane kind of slid sideways for a bit then straightened up and flew right.

Later on these airplanes were up graded and their control systems were made proportional and they were flown out of sight. The pilot would stand inside of a radar van, he would watch a “pen” track the path of the airplane on a chart, and input the necessary control to keep the airplane “on course”. This raised the price of the plane to about five thousand dollars. However it gave a target to the larger aircraft guns (90 MM) in spite of the fact that these guns were not used in Korea for Anti Aircraft purposes. Camp Wellfleet didn’t receive many of these airplanes and most of them were lost because they went out of radio range, ran out of fuel and crashed into the ocean.

The weapons that were firing at the RCAT’S were mostly 40 MM guns. In the hands of good gun crews they were deadly, and five or six targets would be lost in a day.  50 caliber machine guns were also used. These were mounted on an open operated gun carriage, four machine guns to a carriage. The elevation and rotation was controlled with a pair of hand grips….they also could be deadly.

But by far the worst weapon was the 75MM Sky Sweeper. This was a new weapon. On the gun carriage there was the 75 MM gun and radar system that controlled the gun pointing. The gunners would “get” the target on the radar screen, flip a switch that set the gun on Auto, ant the airplane was history. The radar would lock on the airplane, fire the gun until the target was hit, and then stop firing as the airplane exploded leaving nothing more for the radar to track, causing the gun to shut down.

Although primitive compared to today’s flight simulators and other gadgets in its day the Camp Wellfleet RCAT program was state of the art and “TOP SECRET”. It provided essential training to Antiaircraft gunners throughout the country prior to engaging in war.